The pavement on the Square is just downstairs to a store of aged and new tunes. The old and young patrons of the End of All Music record store enjoy the homey vibes. From familiar tunes of Oxford to worldwide artists, the End of All Music supplies a variety of local and international genres.

David Swider, owner of the End of All Music, described the record shop as someone’s living room. “It feels comfortable,” Swider said, “like a place you can come browse and find something special in. The rug covered hardwood feels like a gentle memory of stepping into an old friend’s home.”

From the outside looking in, visitors can tell little about the music lovers’ wonderland. A mural of the word, “records,” sits on a brick wall from the bottom of the metal step entrance to the top, but it reveals little until one steps into the store to see walls with arrays of colorful album art.

Early in Swider’s time in Oxford, he worked at Square Books while enrolled at Ole Miss. By the time he left, he was the Square Books marketing director, which would give him more experience in pursuing his own budding idea for the End of All Music.

Swider graduated from Ole Miss just a few years ago, as a journalism and English major. While he was studying, there was another record store in Oxford, but he recalls that there were mostly CDs, and very unlike the store he has founded here. Around the time, the music industry was changing, and both MP3 players and the iPod were popularized.

When he founded the End of All Music in 2012, Swinder started with a business partner, describing the whole experiencing as a “perfect storm of events.” He recalls that the whole thing happened pretty fast, but once it happened, there was no turning back.

The emphasis of the End of All Music is vinyl. Swider said that he hopes that after everyone comes in, they leave and are inspired to buy their own turntable. But the End of All Music does not only sell vinyl; they also sell supplies for getting started with a music collection, from care to accessories.

“[Oxford is] the kind of town that needs a good record store,” Swider explained.

Swider describes Oxford as musically-inclined, with a host of events for musicians and music lovers alike. From concerts on campus to events at the Lyric, Proud Larry’s and, of course, Thacker Mountain Radio at Off Square Books, there are a diverse selection of musical events.

Additionally, Oxford is crawling with artists. There are both budding musicians who have just released their first singles (Polly Watkins!) and singers and songwriters who have left OxTown with the legacies of their projects. For example, Kate Teague, former director of Thacker Mountain Radio, may have left Oxford, but her live radio show remains.

The End of All Music also rounds up their selections for the best music of the year. For 2019, this list topped off with David Berman’s Purple Mountains LP and also included the likes of locals like Kate Teague.

And, the clientele of the End of All Music varies just like the tunes they carry.

“We really don’t have a typical customer,” Swider said. “I mean we sell records to little kids looking for Panic! At the Disco and Greta Van Fleet records that are 13, 14 [years old], all the way up to grannies and grandpas looking for old country or Frank Sinatra.” 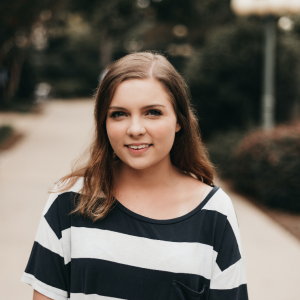 Megan is a Senior from Meridian, Mississippi, majoring in Arabic and Journalism. She loves traveling the world and has spent 4 months in the Middle East learning the Arabic language while immersing herself into the culture. Her biggest passion is photography and she can always be seen around Oxford with a camera in her hand.