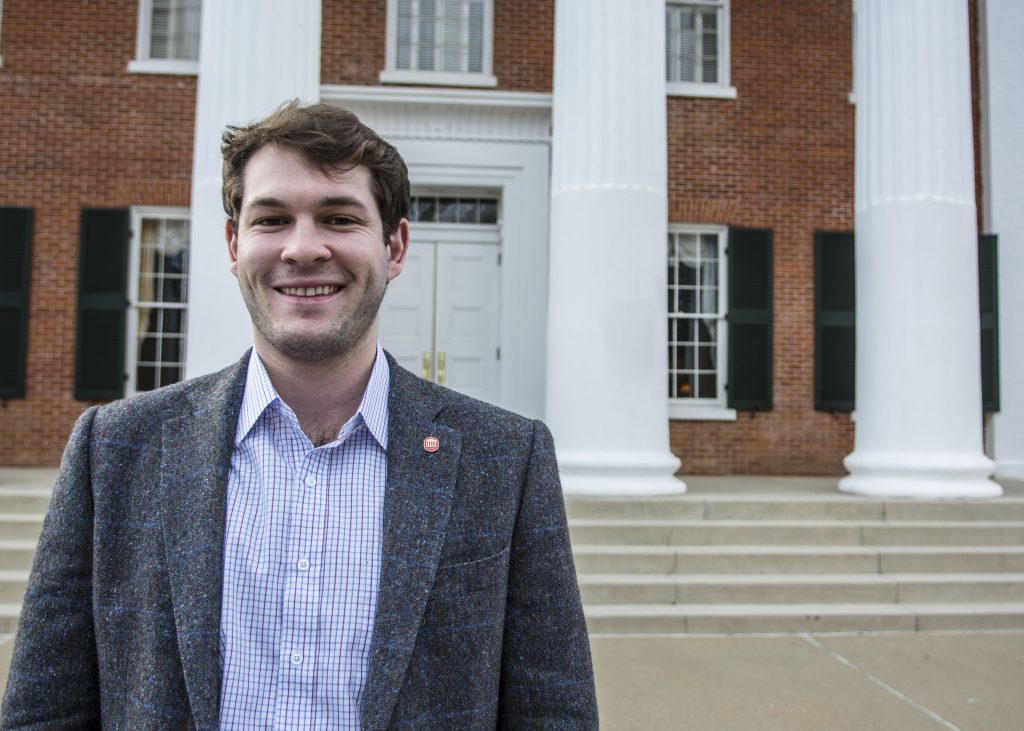 If you could go back to your first day on the job, what is something you would tell yourself?

Keep your vision in mind. So you start out when you campaign for any position, you try to get people to support you for something with a vision and a platform, and it’s really, really, really easy to lose sight of it as you start working on things. Because you work with a lot of people, and they have different interests that they want you to pursue, and you have to figure out ways to integrate it. Sometimes it kind of just gets lost in the shuffle. I would remind myself to constantly remember why I ran. You know what my vision is, what my goals were in the beginning and see if I’ve accomplished them. Identify obstacles that got in the way and sort of prep myself for those obstacles that might have gotten in the way.

What do you hope is the one thing that students remember about you?

I think just how committed I was to the entire student body. There’s a lot of partisanship sometimes just on college campuses, and I don’t want to be known as a president that picked sides easily or really only advocated for the interests of certain student groups, and also I think it’d be really cool to kind of be in the conversation when, if the land shark solidifies its legacy here at Ole Miss. I know that it was a collective effort by a lot of people on campus, but I certainly know that it was tough on me, and it was something that I’m really proud of and excited I was able to help institute that lasting change.

How do you think being an Oxonian has impacted your ability to serve as ASB president?

It’s allowed me to really serve as ASB president because I’ve been able to plug myself into the community–not just the Ole Miss community but the Oxford community too, and sort of be that liaison with city leaders, community leaders and such. So those relationships that I built up for 21 years before I even considered running for student body president, those were already there, so I was able to kind of able to play off those pretty immediately. That’s given me quite a bit of leverage when it comes to lobbying for certain things for students and kind of having a seat at the table already. That helped out a lot.

What’s your favorite memory as a student?

I don’t ever tell anyone this, but I studied abroad the spring of my sophomore year, and I really, really missed Ole Miss. I didn’t really miss anyone in particular. I didn’t really miss anything in particular. It was just the atmosphere at Ole Miss. I couldn’t really put my finger on it, so I came back in the fall of my junior year and elections for personalities were going on and I remember sitting in front of the union just kind of making sure there were no rules violations for elections, and I just remember seeing so many people out supporting their friends that didn’t really care about ASB but really, really cared about the person they’re out there for. And that kind of reminded me why I love Ole Miss, and that was something that just stuck with me and it made me realize this is why I’m here. It’s you know the family feel we have here at Ole Miss, the love that Ole Miss students have for each other no matter what.

Is that something that you felt was missing when you were abroad?

The campus I was at [abroad], there wasn’t much emphasis on student life. People commuted to campus. Not many people lived on campus, so it was a lot of just, you know, you just went to class and then you went home to your hometown, or maybe you stayed on Friday night because everyone wanted to go to the pub in town on Friday night. That was something that was missing, the family feel, the feeling that you belonged at the school you were at, so that’s something that I really, really missed when I was away.

You talked about being proud of the Landshark, but what are you most proud of during your presidency?

I think that’s the thing I’m most proud of because it’s something I wasn’t even planning to do. It had been a conversation that had been talked about for a while on campus, and it wasn’t something that I was going to fight for. And then I had some people come to me with some ideas, and I thought this might be a good time to do it. I didn’t realize how divisive it would be. You had a small minority, but a loud one, that was really advocating for other options. For about a month I felt like I was on an island, and I was getting phone calls every day from alums and community members that were expressing their distaste with my choices and were kind of angry. I had to kind of tune that out, so that was a real challenge. There were a lot of internal challenges too, just within the student body. It’s something I’m really proud of personally, just because I was able to deal with a lot of stress at once. I mean, it was probably the hardest month of my life, but I was able to get through it.

Also, volunteering at LeapFrog was one of coolest things I’ve done just throughout college but also during my term. I’ve made time to make sure I tutored at LeapFrog. That was an opportunity for me to kind of get away from everything. I have to put my phone up for two hours and tutor this kid who had no idea what was going on in my life, and I could just invest in him. It was a good break twice a week for me to kind of take myself away from all my worries and make sure this kid is learning how to read, and he can talk to me about whatever is going at home or school. You really feel you are doing something for the one child that no one else is really doing for them. He’s got his parents; he’s got his teachers, but you still feel like you’re doing something to make this child better and this community too. It’s gratifying for sure.

There are days for sure that I have class all day and then meetings all day. I was up until 3 am last night. I had to get up at 7 this morning. I really don’t want to go in today, and I could just call in sick, and [the director] would be cool with it, but then I realize that one time I’ve done that. If I come back, they’re like ‘where were you on Tuesday?’ and you’re like ‘ah sorry. I was feeling not well,’ and you’re like man I should have come. You feel like you’ve really committed to something. I’m used to committing to a lot of things, but that’s something special. That’s not something you can just kind of toss to the waste side. You’re holding yourself accountable.